Tyland Simpson and Jeremiah Owens take down a Golden Eagle running back. (Courtesy of Gregg Fuller) 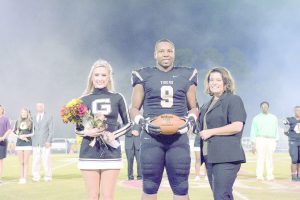 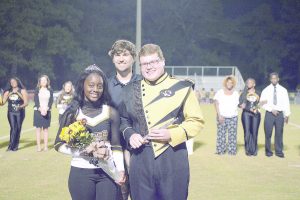 The Greenville High Tigers made easy work of downing the Golden Eagles of Booker T. Washington 38-6 this past Friday.

It was a solid win with the offense, defense and special teams clicking on all cylinders for four quarters. By the end of the first half the Tigers led 30-0 and were able to cruise for a victory.

With the win Greenville’s overall record is 5-3 and 3-2 in region play.

Cheerleader Caitlyn Tilley and Greenville High Tiger defensive lineman Isiah Thornton, who are also seniors, were named Miss and Mr. Football. They were presented their awards by Wendy Smith who teaches English at GHS.

Greenville will travel to face the Carroll High Eagles this Friday night in Ozark. It is a region game for the Tigers and the opposition is going to be tough. Carroll is undefeated and 8-0 for season and 5-0 in region play. Their closest game was against Charles Henderson of Troy, 10-3.

Greenville head coach Josh McLendon does not expect this to be an easy game and said they have to match Carroll physically and then execute.