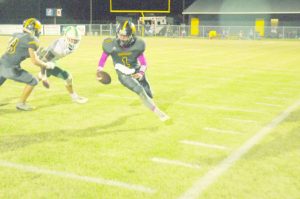 This past Friday night signaled the last football game of the season for McKenzie as they lost to the Brantley Bulldogs 55-0. The highlight of the evening for McKenzie came before the game with the introduction of seniors and crowning of Mr. and Miss Football for McKenzie High school. For McKenzie seniors Maggie Brown, Daniel Gaston, Austin Huckaba, Xandria “Peaches” Maye, Olivia Nelson, Dylan Odom, Camryn Reaves, Dillan Sanders, Matthew Sexton and Taylor Turner, the evening represented the last time the outstanding  young adults would step onto the football field as high school student athletes. Seniors Xandria Maye and Dylan Odom were crowned Miss and Mr. Football for McKenzie. Xandria Maye participates in JROTC classes, attends Pine Level Baptist Church, is a member of the FBLA club for two years and a member of the science club for one year. Maye has also worn the McKenzie Tiger’s mascot uniform her 11th and 12th grade years and played basketball for the Tigers since her 9th grade year. Mr. Football Dylan Odom is the president of McKenzie’s FFA club, attends Antioch Pentecostal Holiness Church and has played on the football team since his freshman year of high school. The game against the Brantley Bulldogs began and ended in a shut out for the Tigers. In the first half, McKenzie showed some success with quarterback Daniel Gaston being forced to run the ball on several occasions making a few small gains but never managing to cross the goal line. It became apparent the Tiger’s passing game was not cutting through the Brantley defense with the Bulldog’s snagging several interceptions for big gains, and touchdowns. By the end of the first half, the score was 41-0 Brantley. The second half proved no change for the Tiger’s. The Bulldog’s defense would not budge for points while their offense continued pressing McKenzie backwards until the end of the  game.