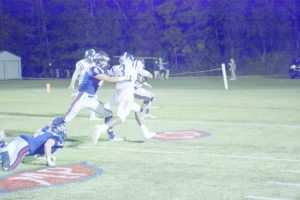 Eagle Bryan folds tries to bring down a Rebel running back on a long scamper. (Bruce Branum | The Standard)

The last football game of the season for the Fort Dale Academy Eagles this past Friday night was full of emotion as FDA lost to the Bessemer Academy Rebels 49-6.

The Rebels cut the Eagles hopes of playoffs out of the picture early Friday night. FDA’s offense struggled to put any points on the scoreboard until after the first half. Between a few bad snaps, short punts and a more than eager Rebel defense, the second quarter ended with a Rebel lead 35-0.

Going into the last half the Eagles walked onto the field with some renewed vigor scoring a touchdown in the third quarter but that was all the Bessemer defense would allow.

FDA’s defense, during the second half, held the Rebels offense more firmly than the first half. Although the halftime break gave the Eagles an extra breath, it would not be enough to close the gap before game ended.

Head coach ‘Speed’ Sampley said, “Bessemer has a good team.  They outplayed us in pretty much every aspect of the game and we could not get anything going on offense.

“We needed to be able to do that.” said Sampley, “That and keep the ball away from them. Once that did not happen we were in trouble.” he continued.

After the end of the fourth quarter the FDA football players, cheerleaders, staff and parents gathered near midfield together, it became apparent that there was great sentimental value in this game.

It may have been the school’s last game of the season, but for 15 seniors the sound of the horn ending the game was the last time they would put on pads and a helmet for Fort Dale Academy.