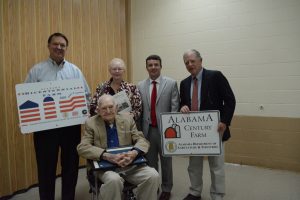 Cates, whose family has owned and operated Persimmon Ridge farms for over two hundred years, was presented with a certificate and sign designating the farm as an Alabama Bicentennial Farm. Originally the farm was used for row crops and timber, but since, has been used for timber and cattle production.

Cates’ ancestor, Jonathan Harrison purchased the land in August of 1817. The ownership of the farm can be traced from Jonathan Harrison to his son Daniel Harrison, then to Josiah Seaborn Cates and finally to Tap and Eric Cates.

The certificate Cates received stated, “This farm has been owned by the same family for at least two hundred years. The vision and fortitude of citizens like the original owners, trailblazed the path to our statehood. The farm demonstrates a durability and love of the land that is the heritage of the State of Alabama.”

The original purchase of land by Cates’ ancestors was designated a Territorial Land Patent from when Alabama had not been established as a state and was still part of the Mississippi Territory.

All the land that became Butler County was still in the Mississippi Territory. It wasn’t an organized incorporated territory until Dec. 10, 1817, when the western half of the territory became the State of Mississippi and the eastern half became the Alabama territory.

Sanders also accepted a sign and certificate from the State of Alabama on behalf of his family in recognition of Sanders Farm at Dead Fall being designated as an Alabama Century Farm.

Brooks stated, “Sanders Farm at Dead Fall has been owned and operated by the same family for over 100 years. The property was originally purchased by Lum Bargaineer and his wife, Effie Pearl, on Dec. 27, 1905.”

The certificate read, “This farm has been owned by the same family for at least one hundred years. The farm demonstrates a durability and love of the land that is the heritage of the State of Alabama.”

Brooks also stated that only 10 other farms in Butler County have recognized as a Century and/or Heritage Farm.

Barbara Middleton, President of the Butler County Historical and Genealogical Society, was also present for the recognitions to Cates and Sanders. Her ancestors were the first to purchase land in what is now Butler County.