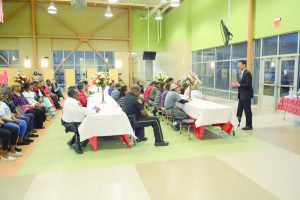 The Butler County Board of Education held their regular Board meeting for February last week on Tuesday night in Georgiana School’s media center. Highlighting the meeting was a Board action to pursue a six mill Ad Valorem tax increase to fund “The Butler County Commitment.”

“In my nearly 30 years as an educator, I have yet to see such a disconnect between intelligent and talented students and low student performance outcomes,” said Superintendent Dr. John Strycker.

“The State’s recent grade report on school systems is an example. We received a D. Our kids are better than that…much better,” said Strycker. “We need to get them connected.”

The Butler County Commitment is made up primarily of three components:

Strycker emphasized that the foundation of the school system’s approach to education is getting students involved and connected to something positive in their lives.

“I feel we need to fund this concept,” said Strycker. He presented a few bullet-points regarding funding:

The Board also heard comments from teachers, administrators and a student regarding the importance of the proposal to fund the initiative to get students involved.

Under the proposal, a six mill increase would equate to $3.75 per month tax increase for the average homeowner in the community with a house fair market value of $75,000.

“For our average homeowner, we are asking them to consider under a dollar a week toward this commitment,” said Strycker. “Regardless, we will press on working hard to educate our kids to the best of our ability.”

The Board did vote unanimously and directed Strycker to proceed with the process of a proposed six mill increase.

Strycker said, “I was very encouraged by our Board of Education meeting this past Tuesday night in Georgiana. The meeting was well-attended and positive in nature as we work together with our community in the best interest of our students.”

Prior to the Board meeting, the Board recognized the city employees and officials of Georgiana for their team approach for prioritizing the community’s youth. “I have felt welcome in Georgiana from day one.  This community loves their children and their actions demonstrate such,” said Strycker.

Strycker also recognized student Victor Gomez for his act of kindness in the community.

Other Board action included approval of the Personnel Report and contract extension for the Wide Area Network.