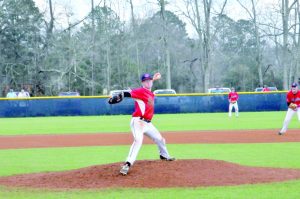 Sophomore Baron Brack get ready to release a pitch in one of this past week’s tournament games. (Clay Branum | The Standard)

Monday, Feb. 19, the Fort Dale Eagles varsity baseball team hosted the Macon East Knights ending in a loss for the Eagles 6-3. The following Thursday was the start of the annual FDA Baseball Tournament.

On Friday, Feb. 23 the Eagles had their first game of the tournament against Sparta and won 5-0. Later the same evening, FDA faced off against Wilcox Academy in the last game of the day for another win, 4-2.

On Saturday, FDA traveled through the single elimination tournament defeating Lowndes Academy 4-1. They then played the Crenshaw Cougars defeating them 15-5 in the final round of and were claimed tournament champions.

The Eagles varsity boys baseball teams next scheduled games are Tuesday, Feb. 27 at home against Monroe Academy and then they travel to Lowndes Academy for another tournament, March 1-3.