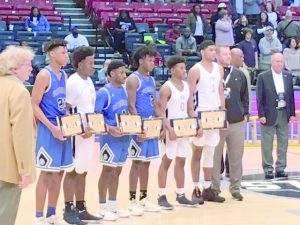 The Sacred Heart Cardinals (22-10), once again earned their spot as AHSAA Class 1A boys basketball state champions for the fourth year in a row as they defeated the Georgiana Panthers (30-3) 65-56 in overtime on Thursday, March 2 at the Birmingham-Jefferson Civic Center.

It was Sacred Heart’s third year winning over Georgiana since 2016 in the Final Four.

Sacred Heart led 30-28 before the half until Georgiana Panther (Junior) Christian Williams shot a three-pointer that gave Georgiana the lead at half time 31-30.

Both Cardinal Diante Wood and Panther Martavius Payton led their teams with 14 points at half time. With two minutes left to go in the fourth quarter Sacred Heart led 50-46, but Georgiana made their way back as Senior Jamichael Stallworth shot a three-pointer to tie up the game 55-55 and sent the game into overtime .

Sacred Heart then took over the game winning and won 65-56.

Diante Wood led the game with 22 points for the Cardinals and Jamichael Stallworth led the Panthers with 17 points.