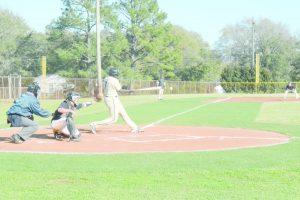 Greenville High School Tiger varsity baseball played doubleheader against Opp on the Tuesday, Feb. 13 and brought home two losses. Game one saw the Tigers fall 10-7 and game two was lost 6-1. The Greenville High Tiger softball team also had two games that week. On the Feb. 13, the lady Tigers played against the Charles Henderson Trojans and came away with a loss 17-1. The Lady Tigers second game on Thursday, Feb. 15th against Red Level also ended in a loss, 5-0. The Fort Dale Academy Eagle varsity baseball team also had a double header on the Feb. 13 vs. the Morgan Academy Senators gaining two wins with both games scores ending 6-4. The Lady Eagles softball team had a doubleheader against Crenshaw on the Monday, Feb. 12 and lost the first game 5-1. They won the second game 5-3. The Lady Eagles had another doubleheader against Morgan on the Feb. 13 and won both games. The first game was tight with the score ending 3-2. In the second game, the Eagles downed the Senators 5-3. The McKenzie Tiger varsity baseball team held a game against Greenville on the Feb. 12 for a loss 11-1 The McKenzie Tiger softball team played against the Highland Home Flying Squadron on the Feb. 13 for a loss 15-0. They also lost to the Georgia- Greenville High Tiger Tyler Powell gets a hit against Opp. (Bruce Branum | The Standard) na Panthers 16-2 on the Feb. 15.