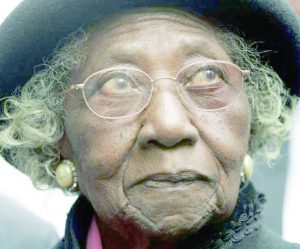 As the celebration of Women’s History Month continues, many women across the nation are being recognized for their contributions to American society. One Montgomery native who made a huge impact on race relations in Alabama is Johnnie Carr, a noted Civil Rights activist. Born in 1911 in Montgomery, Carr grew up in a close-knit family that faced difficulties when her father passed away when Carr was still asmall child. Though her father’s death impacted her family financially, Carr’s mother, a constant source of inspiration to Carr, made sure that her daughter felt loved and secure. According to the “Encyclopedia of Alabama” website, Carr attended high school with Rosa Parks, and the two would later become reacquainted during the Civil Rights Movement after Parks refused to give up her bus seat to a white passenger at a time when busses were still segregated. After her first marriage ended in divorce, Carr decided to go back to school to focus on a career in nursing. In 1944, she married Arlam Carr, with whom she shared a passion for helping African Americans in Montgomery during the Civil Rights period. Carr participated during the movement by helping to transport people to and from work during the Montgomery Bus Boycott in the 1950s. She and her husband also made the decision to sue the Montgomery Board of Education in order for their son to be able to attend the all-white Sidney Lanier High School. At the time, the schools were still segregated in Alabama, but the Carrs won their case, and their son became one of thirteen black students who desegregated the Montgomery School System in 1969. In her later life, Carr continued to work with various organizations in Montgomery to promote racial harmony between  whites and blacks. She passed away on February 22, 2008.