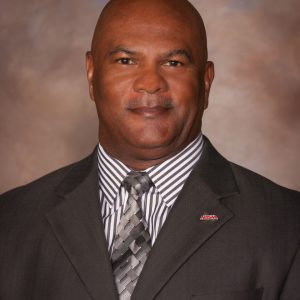 “We are saddened on one hand to see Mr. Stallworth retire, but we are also excited for him as he moves into the next phase of his life,” Savarese said. “We thank him, not only for his years of service as the Associate Executive Director, but also for his many years as a high school teacher, coach, and administrator and volunteer. His service has been outstanding to this organization, to the member schools and the state of Alabama.”

Savarese said he has full confidence in Briggs’ and Lee’s abilities to step into their new positions. “The AHSAA is very fortunate to have such outstanding individuals already on staff who are capable and ready for these new challenges. And too, we are very excited to have Mr. Dean join the AHSAA family. He has served in many volunteer capacities while serving as an officer in the AHSADCA, and his leadership with the Montgomery Public Schools is well documented.”

Stallworth, a graduate of J.F. Shields High School in Beatrice and Huntingdon College, began his career as a teacher and coach at Lomax-Hannon Community College in Greenville, then began a 32-year career in high school education that took him first to Monroe Senior High School, then to Brantley High School in 1988 where he guided the Bulldogs’ Junior high basketball team to a 48-0 record from 1988-90. He served as the varsity boys’ head basketball coach from 1990-2005 compiling a 298-47 record and guiding Brantley to three straight state championships (1993, 1994 and 1995). He was named 1A Coach of the Year in 1993 and 1994 and 2A Coach of the Year in 1995.

“I can’t fully express how thankful I am to Mr. Savarese and the Central Board of Control for allowing me the opportunity to serve the AHSAA as Associate Executive Director,” said Stallworth. “I will appreciate forever the relationships that have evolved with administrators and coaches across the state. The AHSAA is highly regarded across the nation, and the AHSAA staff is second to none. They have been extremely supportive of me during my tenure here. This executive staff has been a game changer, and I cherish my time with them as I close out this chapter of my career.”

Briggs, an outstanding high school student-athlete who played college football at Auburn, served as a college assistant coach and high school head coach and athletic director at his alma mater Greenville and Florence high schools before joining the AHSAA staff. He will become just the fifth Associate Executive Director in the AHSAA’s history.

“I want to thank Mr. Savarese for his leadership and am very appreciative of the confidence he has in me that I can do the job,” Briggs said. “I also thank Mr. Stallworth for his example and leadership. There have been some great men in this position and I am very humbled for this opportunity.”

Lee, who coached basketball and golf and served as a high school math teacher for 22 years, joined the AHSAA staff last summer as Assistant Director for Special Programs. He also assists Briggs with the AHSADCA.

“I have learned a lot during my time here at the AHSAA and I look forward to working with our coaches, in all sports, as well as our athletic directors to enhance educational-based athletics throughout our state,” Lee said. “I am extremely grateful to Mr. Savarese for giving me the opportunity to lead the AHSADCA. I also thank Mr. Briggs for his leadership and for helping prepare me for this opportunity I look forward to the challenges ahead.”

He has served as District Director of Athletics for the Montgomery Public Schools since 2013, has also served as a principal, assistant principal, curriculum instructional assistant, teacher and coach during his tenure with the MCPS, beginning in 2003. He also served as a head coach for the City of Montgomery Parks and Recreation Department and has been an AHSAA and youth baseball official since 2005.

“I am extremely grateful to Mr. Savarese for giving me the opportunity to join this wonderful organization,” Dean said. “It has always been a dream of mine to work for this organization. I look forward to working with the great staff at the AHSAA and AHSADCA.”