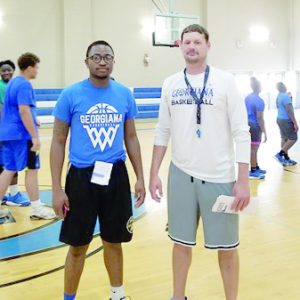 Georgiana School hosted a Summer Youth Basketball Camp for boys and girls ages 8 to 14.  The camp started Wednesday, May 30 and ended June 1 with all the proceeds from the camp going to benefit the Georgiana School basketball program.

When asked what the campers could expect, Coach Norris said, “We are teaching fundamentals in the morning like dribbling, passing, defense and shooting. The afternoon we get to the fun stuff like full court team competition including Gotcha and Hot shot.”

Georgiana’s Varsity year ended with an incredible 30-4 season and when asked about how the team looked for the upcoming year Coach Norris replied, “We lost three starters, but we’re returning six so the future looks good.”

Coach Norris elaborated by saying there were a lot of division changes, with some schools moving up from division 1A, so the competition will change.