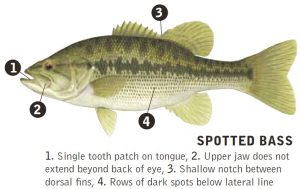 The Alabama Department of Public Health (ADPH) has issued its fish consumption advisories for the year and major waterways throughout Butler County remained of the list.

Falling in both Basins 4 and 5, fish in and waterways in Butler County were not named in the Alabama Department of Environmental Management’s (ADEM) testing for common contaminants in the state’s waterways. Waterways prevalent in Basin 5 Lowndes and Crenshaw Counties were also not named in ADEM’s testing.

While waterways in Butler, Lowndes and Crenshaw were not cited for consumption advisories, neighboring Montgomery County was cited at the Tallapoosa River, approximately 3 miles upstream of US Hwy 231 for high mercury levels in its spotted bass population.

Mercury in waterways is bound to proteins found in fish tissue, including muscles. ADPH advises to limit consumption of spotted bass to one meal per month due this contamination.

A statewide advisory has been issued for at-risk groups, which includes babies, children under 14, women who are nursing, pregnant or plan to become pregnant. ADPH also recommends discretion when eating older and/or larger fish as they often carry higher levels of toxins.

Fish can become contaminated through erosion, storm-water runoff, industrial and municipal discharges, agricultural practices, nonpoint source pollution as well as other factors. Contaminants are carried downstream by rivers and creeks into lakes, reservoirs and estuaries. Fish can absorb contaminates from water, suspended sediments or their food. Alabama’s main contaminants include Mercury, Polychlorinated biphenyls and Perfluoroalkyl sulfonates.

Although a waterway may have a consumption advisory, ADPH advises it is likely still recreation safe as toxins found in fish tissue are often high than the water it inhabits. ADPH, however, does recommend catch-and-release style fishing for areas where consumption advisories have been issued.