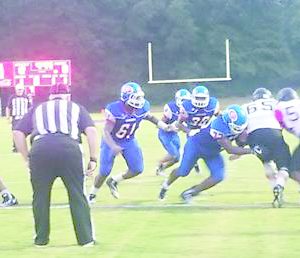 The Panthers scored on this play to take the lead. (Ray Van Cor/The Standard)

The Friday night lights engulfed Georgiana’s Harmon Field this football season once again and Powell’s Panther’s did not disappoint the home town crowd. The gritty bunch struggled in the first quarter with first game jitters and lack luster defense and fell behind quickly 12-0 to Saint Luke Episcopal.

A large chunk of yardage gained by Panther running back Kyle Powell seemed to change the momentum of the game and the Panthers found their footing. With 4:15 left in the first quarter Powell punched in the two point conversion for Georgiana to take the Lead 14-12. St. Luke battled back putting six more on the board at 1:28 left in the first quarter and the lead 18-14.

From there it was all Georgiana as they trotted off at halftime with a 41-18 lead.

The backfield for Georgiana had remarkable speed to the point where even a referee was overheard asking another referee, “Did you see that?! Man these kids are fast!”

St Luke managed to put six more on the tally books but Georgiana kept them in-check the following quarters. The buzzer sounded and Powell’s Panthers had secured their first victory 47 – 24 over the St. Luke wildcats at home.

When asked about his first outing for this season Coach Powell said, I’m really proud how my guys, they continued to fight and never gave up. It’s obvious there are a lot of things we need to work on and we’re not in the shape we thought we were in but we’ll get it worked out.”

Coach Powell’s final words to his team before they prayed were, “I love you and I’m proud of you. Next week the Panther’s travel to Luverne to face the 4A Tigers in a non-conference game. This one will really test the metal of the Panthers.