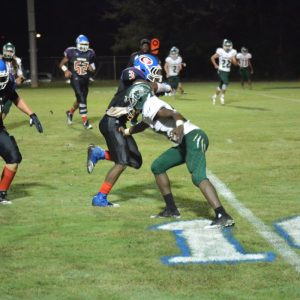 Georgiana Panther Christian Williams evades a tackle on his way to score a touchdown. (Bruce Branum | The Standard)

Coming off of a hard loss to Florala, the Georgiana Panthers were looking to play well in last week’s homecoming outing. GHS head coach Ezell Powell said the team had executed well in the 35-28 win against Florala.

Scoring early in the game and holding the Tigers to a for majority of the first half, Powell said he was proud of the team’s drive, but still saw areas of opportunity in the team’s gameplay.

Powell said the team had fared well despite five injured players and hoped to get the younger players a chance of finding a balance in their play.

“The excitement of homecoming affected them a little, but I think most of our things is injuries,” Powell said. “We’re shuffling guys around. They’re playing positions they’re not used to playing. We’ve been trying to stay afloat right now while we try to get some guys that are banged up back, and that inconsistency in guys playing in positions they don’t normally play showed up.”

Although key players from the team were not on the field against Florala, Powell said members of the team had stepped up and played well in the homecoming matchup.

“I thought quarterback and linebacker Chris Mixon played well,” Powell said. “When we moved Kyle Powell, he ran the ball well. Christian Williams did well on both sides of the ball, both offense and defense. Kendall Long played well on the defensive line. There were other guys who did great things along with them, too, but these guys just immediately stood out.”

The Panthers will look to face McKenzie this week, and Powell said he is encouraged heading into the county-rivalry game but hopes the team will maintain its composure in one of the team’s most emotionally-important games of the season.

“We’ve got to work on slimming our game plan down and do what we know we can execute,” Powell said. “We can’t go in there trying to do everything we are used to doing. We’ve just got to go in there and execute what we know how to execute and execute them consistency. WE know McKenzie is going to make adjustments, so we’ve got to make adjustments and the guys have to play well. They can’t get caught up in the fact that it’s a rivalry ball game.”