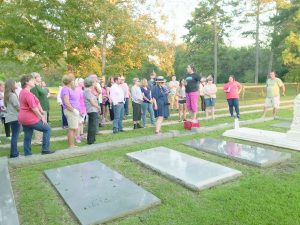 The tour drew a crowd of over 75 people with many coming from as far away as Montgomery.

“We had a lot of people from Georgiana,” said Mollie Waters, who organized the tour along with help from Tracy Salter at the Greenville Area Chamber of Commerce.

“There were quite a few people from Montgomery as well, but mostly, the people who attended were from Greenville.”

The tour began at 6 p.m., which meant the sun had started to set, adding a lovely atmosphere to the event.

“When we first started talking about doing these tours back in August,” said Waters, “we thought October would be ideal because it’s not too hot or too cold yet. Of course, this year, summer just won’t end. However, because the sun had gone done, and we were in twilight, the temperature was not too bad overall.”

Waters started the tour by explaining how the cemetery came to be.

“This cemetery was created in 1862 because Pioneer Cemetery downtown had already started filling up,” said Waters. “The city purchased about four acres of land for the cemetery, and it later incorporated a nearby cemetery known as Pine Crest. The two are now Magnolia Cemetery.”

Waters pointed out that the wrought iron fencing at the front entrance of the cemetery once stood on the grounds of the state capitol in Montgomery as far back as 1861.

As the tour began, Waters stopped at different graves along the way pointing out architectural details, what the symbols on the headstones meant, and who some of the well-known people buried in the cemetery are.

“Sergeant William J. Frazer was a soldier during World War I,” said Waters at the Rouse-Frazer plot. “According to some sources, he was shot twice by German machine gun fire during a battle in France. He lay in the battle zone for 17 hours before anyone was able to come to his aid. He survived and became a prominent citizen in Greenville.”

Later, at a grave in one of the oldest parts of the cemetery, Waters pointed out an unusual grave symbol.

“This symbol of a hand reaching down from the sky and breaking what looks like a chain is rare,” said Waters. “It represents God’s hand breaking this person’s earthly bonds so the person can ascend into heaven.”

Waters also talked about the meanings of flowers, such as the calla lily and the rose. She talked about animal symbols, including the dove and the lamb.

“Magnolia may be my favorite cemetery in Greenville,” said Waters, “just because of its sheer volume. With this many old graves, you see a lot of great symbols.”

The next tour is this coming Saturday at 6 p.m. at Pioneer Cemetery in downtown Greenville. The tour will start at 6 p.m. Cost is $5 per person.