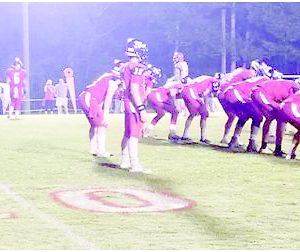 The young Eagles of Fort Dale Academy were grounded under the Friday night lights. There would be no soaring for them when they squared off against the Patriots of Pike Liberal Arts.

The Eagles with a 2-5 record and 0-3 in conference play were no match for the undefeated juggernaut that appeared to be Pike Liberal. The Patriots boasting a 7-0 record with their latest 24-14 victory over Abbeville Christian Academy came to play.

It was all Patriots from start to finish, however, the young Eagles showed spurts of incredible play at times in every facet of the game, alas when the buzzer sounded, it was a 49-0 rout over Fort Dale.

The Eagles have a conference game against the Knights of Northside Methodist Academy in Dothan this Friday night. The Knights are 2-5 on the season with back to back wins with their last victory over Success Unlimited Academy of Montgomery 30 -12.