FDA running back Cade Mansmann heads up field with an escort of blockers. (Bruce Branum | The Standard) 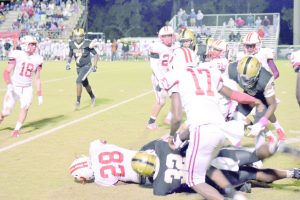 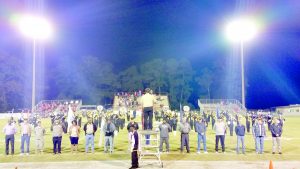 Greenville finished its regular-season conference games sealing its first place title in Region 2 with the Tigers beating Carroll 36-13. The Tigers look to host the Stanhope Elmore Mustangs in a non-conference matchup to end the its regular season on this Thursday. The Mustangs are 5-4 for the season. Before the game Greenville High School JROTC cadets and band honored veterans of the armed service branches.

The Georgiana School Panthers also finished their regular season by defeating Red Level 40-0. With the win, the Panthers claimed a 9-1 record so far this year and also earned the football program its 500th win over the history of Georgiana football.

The Panthers are ranked No. 6 in Class 1A and could face either Sweetwater or Notasulga in the first round of playoffs. It will be the fifth season in a row that Georgiana has made the playoffs under head coach Ezell Powell.

Powell indicated he was proud of team for their improvement since the beginning of the season.

The Fort Dale Academy Eagles finished its season with a 48-13 loss against Escambia. With the loss, the Fort Dale Eagles record for the season is 2-8. The Escambia Academy Cougars improved 8-2 for the season and look to host Coosa Valley Academy this Friday.