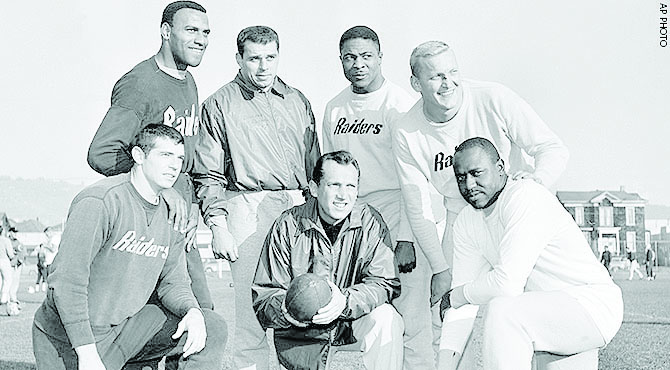 Lately I have been writing about All-American players from the University of Alabama. This week, I am going to write about a Butler County Native who set an NFL record, who passed away this month. The individual is Tom Morrow.

Morrow was born on June 3, 1938 in Georgiana. Until his senior year at Georgiana, Morrow did not play football. Morrow did well enough to earn a scholarship to play football at Southern Mississippi when he graduated from Georgiana in 1956.

Morrow played in the 1962 Senior Bowl and then the Oakland Raiders signed Morrow as a free agent.

The Raiders finished the 1962 season at 1-13. Morrow intercepted 10 passes that season. The last four games of the season, Morrow had at least one interception a game. Entering the 1963 season, Oakland hired a new head coach. His name was Al Davis.

Yes, Al Davis who later was the managing partner and owner of the team. The first four games of the season, Morrow intercepted a pass in each game. The next game the streak ended. Morrow intercepted nine passes that season. The Raiders finished the 1963 season at 10-4.

Intercepting a pass in eight consecutive games was and may be still an NFL record. 1964 was the last season Morrow played with the Raiders. Morrow intercepted four passes on the season and suffered a career ending injury.

Morrow married a Dixie Darling, which is a majorette in the Southern Miss Band. Her family owned a car dealership in Hattiesburg Miss. Morrow was inducted into the M-Club Hall of Fame on May 9, 1970. He and his wife and family later sold the car dealership. The Morrows retired to a golf resort near Loudon, Tenn. Later, the Morrows moved to Lenior, Tenn.

On April 4, Tom Morrow passed away from a lengthy illness. Morrow went from Georgiana, Southern Mississippi and to the Oakland Raiders. He had a great ride.

Next week I will continue the series on another University of Alabama All-American player.