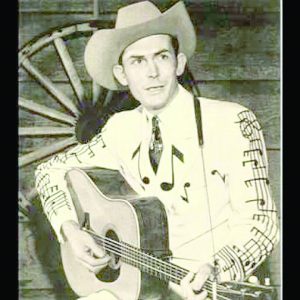 If the good Lord’s willing and the creeks don’t rise, thousands of faithful fans will be gathered at Georgiana, June 1-2 for the 39th Annual Salute to Hank Williams Sr.

The faithful are not just local Hank Williams devotees, but come from throughout the United States and several foreign countries. They will meet on the grounds of his boyhood home to share stories, listen to his timeless music, and fellowship in a family atmosphere.

According to Margaret Gaston, a Georgiana historian, Hank was born close to Mount Olive West Baptist Church, near Garland, in Butler County. Hank’s father, Lon Williams was engineer on engine No. 14, one of two logging trains operated by W. T. Chapman Lumber Co.

By the time Hank was six years old the family was living in McWilliams, in Wilcox County. Hank entered first grade at McWilliams and shortly thereafter Lon entered the VA hospital in Alexandria, La.. Hank’s mother Lillie moved the family to Georgiana.

The first house burned in October, 1930.

According to Irene Williams, Hank’s older sister, Lillie had found another small house she planned to rent south of town. “We were on the way to the post office to mail a letter, when a man walked up and said, “I’m Thaddeus Rose and I have a house you are welcome to live in rent free until you are able to get on your feet.” Irene recalled.

The house at 127 Rose Street in Georgiana was more than enough for the Williams family, and Lillie was able to take in boarders to help pay the rent and feed her family. The building which now houses the Hank Williams Museum was built several feet off the ground. Hank found an old car seat and pulled it under the house. He would sit on it, yodel and play his guitar for hours.

He shined shoes and sold peanuts on the downtown streets and at the busy L & N Railroad depot. He met TeeTot (Rufus Payne), an old black man while in Georgiana. TeeTot rode the freight trains, and would sometimes play guitar and sing in the depot. Hank was always following him around, begging him to teach him more about picking the guitar.

The family lived in Georgiana for four years. Fans attending the festival can walk the same ground that Hank did as a boy and listen to the lonesome whistles of the freight trains that pass by on a regular basis. It has been said by more than one person that if you listen closely when the wind is blowing through the trees, you can still hear “ole Hank” strumming on his guitar and moaning the blues.

Festival Schedule: Thursday, May 31, at 7 pm, a free karaoke session.

Gates open Friday at 2 pm, with the entertainment beginning at 3 pm. The lineup for Friday will feature T. G. Sheppard, Brad Magness, Mary McDonald, Colon Leatherwood, and several others sharing the stage. T. G. Sheppard, the featured entertainer will take the stage about 9 pm.

On Saturday, the music will begin around 9 am with the Hank Williams Fan Club portion of the show. The regular festival entertainers will begin about 1 pm and conclude with Tony Jackson performing at 9 pm.

A special weekend ticket, which will be good for both days, can be bought for $40. This ticket must be purchased by May 26. To order, or for additional information, call 334-376-2396, or log on to: www.hankwilliamsfestival.com.

The Hank Williams Festival is an outdoor event, sponsored by the Hank Williams Museum. There is no reserved seating. Bring your lawn chairs. No lounge chairs, coolers, food, drinks, or pets.