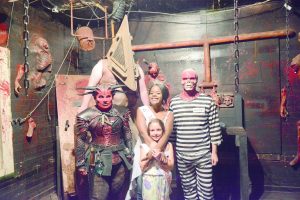 Miss Camellia Mikaylah Dugans and Miss Camellia Rising Star Mattie Cook are pictured with several actors of the Greenville Haunted Firehouse. They recently visited the Firehouse on Sept. 30 and were treated to a few little scares and tour of the attraction. (Bruce Branum | The Standard)

According to Les Liller, captain with the Greenville Fire Department, everyone needs a hobby, and for him, that hobby has taken on a life of its own in the form of the Greenville Haunted Firehouse. Liller spoke to the Kiwanis Club on Monday, and during his program, he told some of the history of the haunted house, what it takes to keep it operating, and how the proceeds from the event are spent. Liller, who had prior experience working with a haunted house in Crenshaw County, said several people associated with the firehouse  wanted to do a fundraiser, and they had tried other options, but then decided on the haunted house idea. “We secured the property, and we had a farmhouse that was just about to fall down, literally,” said Liller. “We spent weeks upon weeks scrounging for materials because we had zero operating budget. We begged, borrowed, but we didn’t steal anything!” The Greenville Haunted Firehouse opened its doors fourteen years ago with only six rooms in operation at the time. The group was surprised by the venue’s immediate success, and over the years, they have continued to grow and change things to keep it fresh and exciting for patrons, who keep coming in droves. “We put nearly 1,000 people through this first weekend,” said Liller, who added that 7,800 tickets were sold at the door during last year’s operation. Liller admitted that it takes a lot of dedicated  volunteers to pull off the event each night it is open. “We need a minimum of about 40 actors with about 20 support personnel,” said Liller. “That’s a bare minimum.” Part of the monies raised from the event goes back into operating costs. One of the things they do to keep the venue exciting is  to change out the themed rooms and the different offerings. In fact, they change up to 30 percent of the attraction each year. The organization also helps in the community. “A lot of the monies we earn go back into the community partly through direct donations,” added Liller. He stated that the haunt crew works with other organizations in the community, such as the Sherriff’s Posse and the JROTC at Greenville High School, but they also give directly to families in need, such as those dealing with sickness. “We love the ability to give where we can and where it is needed,” added Liller. The Greenville Haunted Firehouse, which has won or tied for first place over the last two years as the state’s “best haunt” from Alabamahauntedhouses.com, will be open through the first weekend in November on Friday and Saturday nights from 7 p.m.-11 p.m. Cost of admission is $8 per person.