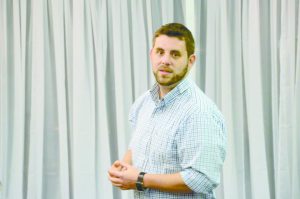 A little over a year ago, a PTSD (Post-Traumatic Stress Disorder) help group was established in Greenville to assist area residents who are suffering with this illness.

Now, that group has assisted several people in the community to begin to improve their quality of lives while battling PTSD.

One person who feels he has been helped greatly by the group is former solider T.J. Garrard.

“In the last year that I have been attending the PTSD/Stress Warrior group meetings, my life has gotten substantially better,” said Garrard. “Being able to discuss problems with people with similar problems has been so helpful.”

Garrard said he has been able to get a great deal of help from many of the other group members.

“Two fellow members of the group, Liza Berrey and former Army Ranger Garey Newton, have been especially supportive of me,” added Garrard. “Because of them, I have been able to face my fears and anxiety, and move on with my life.”

Garrard said he is not the only one who has noticed how much being a part of the group has assisted him.

“My family and friends have noticed a huge difference in my behavior,” said Garrard. “I used to believe that what I went through in Iraq broke me, and I would never be ‘whole’ again.”

Garrard added what he has learned from the group has been invaluable in his healing process. “The group has taught me that what happened to me has only made me stronger to face my problems,” said Garrard. “The group is a reminder it’s okay to ask for help and that suicide is never an option.”

Every day, 22 former and current American soldiers take their own lives, but Garrard believes groups like the one he is in can potentially help those individuals who are struggling with PTSD.

“I believe it can help others, too,” stated Garrard. “Don’t wait to get help. If you’re struggling with PTSD, anxiety or just under stress, come join us.”

The group meets each second and fourth Tuesday nights at the L.V. Stabler conference room from 6:30 p.m. to 7:30 p.m.

“Learn that you’re never alone, and you’re stronger than you think,” said Garrard. “It’s okay not to be okay.”