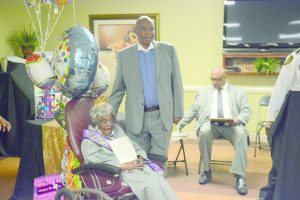 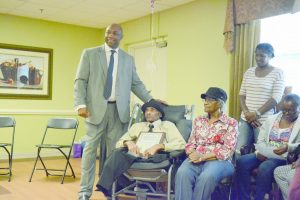 Two centenarians recently were honored with a birthday celebration and proclamations from the cities of Georgiana and Greenville this past Thursday, Oct. 2 at Georgiana Health and Rehabilitation (GHR).

Mary Walton and Willie Savage, both residents at the facility, recently turned 108 and 102 years old respectively.

Both Walton and Savage were treated to a party on that special day with Georgiana Mayor Jerome Antone and Greenville Police Department assistant Chief Anthony Barganier presenting proclamation plaques to them.

They both received happy birthday wishes from family and friends who also shared stories of how Walton and Savage had changed their lives.

Georgiana Police Chief Carlton Cook also spoke at the event and thanked Walton and Savage for their wisdom and GHR for their collaboration with the police department.