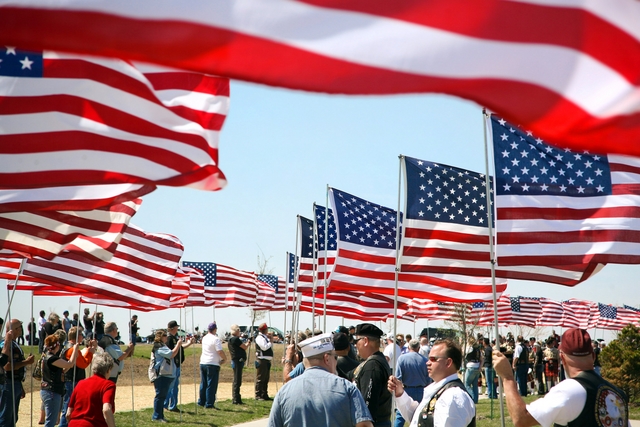 090424-N-3271W-021
VAN METER, Iowa (April 24, 2009) More than 500 veterans who escorted the unclaimed remains of seven Iowa veterans to their final resting place at the Iowa Veterans Cemetery line the procession route with American flags after providing a motorcycle escort for the remains. The ceremony coincided with Des Moines Navy Week, one of 22 Navy Weeks planned across America in 2009. Navy Weeks are designed to show Americans the investment they have made in their Navy and increase awareness in cities that do not have a significant Navy presence. (U.S. Navy photo by Senior Chief Mass Communication Specialist Gary Ward/Released)

Roby: Honor Veterans in Your Hometown

In 1918, on the 11th hour of the 11th day of the 11th month of the year, the armistice ending World War I was signed. Originally known as Armistice Day, Congress later passed and President Dwight Eisenhower signed a resolution officially designating Nov. 11 as Veterans Day.

Now, every year, Americans pause on this special day to recognize all those, young and old, who have served our country in uniform.

While we should honor the service and sacrifice of our veterans every day, this holiday provides a unique opportunity for us to come together as a nation and pay tribute to the men and women who put their lives on the line for our freedom.

I highly encourage you and your family to attend a Veterans Day ceremony in your area. Many towns throughout Central and South Alabama will be holding special observances, and I’ve had the privilege to attend several over the years.

This year, I will be participating in Montgomery’s Veterans Day event at Riverwalk Stadium. For me, it’s not only an opportunity to express my gratitude to those who have served; it’s also a chance for my children to meet veterans and to better understand the sacrifices that have been made on our behalf.

If you can’t attend an event in person, I hope you’ll take time to reach out to friends or relatives who have served to let them know they are appreciated.

This Veterans Day comes as services for veterans are improving, both on a national and local level. I’ve been impressed by the leadership and ingenuity of Secretary of Veterans Affairs Dr. David Shulkin in making the long-troubled Department of Veterans Affairs work better for those it serves.

Closer to home, the Central Alabama Veterans Health Care System (CAVHCS) has again improved its service rating and now ranks three out of five stars. That’s encouraging news, especially considering that just a few short years ago the Central Alabama VA was one of the nation’s worst.

There’s no question that finally having the steady leadership of CAVHCS Director Dr. Linda Boyle has contributed to this sustained progress, and I’m eager to see it continue.

We still have significant issues to address at CAVHCS, which is why I remain actively engaged in working to turn around this system.

It is my distinct honor to represent a district that is home to one of the nation’s highest concentration of veterans and retired military personnel. One of the most rewarding parts of my job is being able to advocate on behalf of those who have served this nation in uniform.

I take my responsibility to look out for veterans very seriously, whether it is through pushing for better policies, fighting to improve access to VA medical services, or going to bat on behalf of someone the bureaucracy has left behind.

If you are a veteran, I would like to extend my sincere gratitude to you and to your family. This country is great because you and people like you were willing to sacrifice on our behalf.