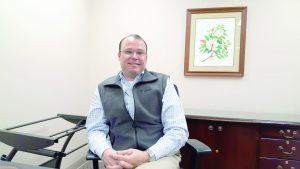 David Norwood, the business office manager for Alabama Power in Greenville, will be missed in the community. He has transferred to the Headland Alabama Power office in Henry County by the time of this article.

On the career move, Norwood indicated that his family lives in the Headland area and felt it time to be closer to them.

Norwood said he was born in Foley in Baldwin County and that he was adopted. He also said that he often spoke with Susan Murphy who recently detailed her own adoption story in a recently published book.

He started out working in offshore drilling on the Gulf of Mexico and when the natural gas drilling started to slow down he applied for a position with Alabama Power.

After passing the test for employment, he began with them in June of 2000 on the rover crew and worked all over Alabama building substations and then transferred to a regional crew in Eufaula in 2004. From there he transferred in 2012 to a customer service position in Abbeville and then accepted the position of Business Office Manager.

In April of 2016 he transferred to Greenville for the same position and has played an integral part in community efforts and providing logistic support to his counterpart Jeff Taylor who oversees power delivery in the area.

Francine Wasden, Director of the Greenville Area Chamber of Commerce, said, “I would like to thank David for his support of the Greenville Area Chamber of Commerce. He was recently selected to serve on the Board and although he will be unable to do so, we thank him for his willingness. He and his family are very special people and have been actively involved in lots of community events. We are going to miss them. I want to wish David all the best in his new position with Alabama Power. It is a great company with even greater employees.”

Though a replacement has not been named at the time of the interview, Norwood stated he is confident Alabama Power will have a replacement named soon and that person will also play an integral part of the community.