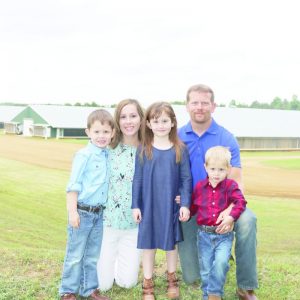 Pictured from left are Levi, Heather, Abigail, Chad and Will Grant. (Photo submitted)

Chad and Heather Grant’s north Butler County poultry farm has been selected as a state finalist for the Outstanding Young Farm Family.

The program works in conjunction with the State Farmers Committee and Young Farmers Division works to recognize young farm families and farmers between the ages of 18 and 35 with a goal of recognizing those doing an outstanding job on their farm, in their homes and communities to promote a better understanding of agriculture within the urban population.

The Grants’ farm, known as Southern Comfort Farm, is under consideration for the award, and Heather and Chad’s three children, Abigail, 7; Levi, 5 and Will, 3, have spent their days watching their father work hard to create a well-established presence in the farming community as well as Butler County.

Chad currently serves as the chairman for the Butler County Young Farmers Federation and seeks to instill a love of farming and agriculture in the next generation of farmers, but he says he never dreamed of being a farmer growing up.

Now, for Chad, the farm is as close to heaven as it gets here on Earth. “There’s nowhere I’d rather be than raising my children on a farm,” Chad said.

Along with being acknowledged as a state finalist, the Grants were selected as the Poultry Division winner for the year.

The state winner will be announced at the Alabama Farmers Federation’s 46th Commodity Producers Conference in Montgomery August 4, and the state winner will go on to compete nationally during the American Farm Bureau Annual Meeting in New Orleans in January 2019.