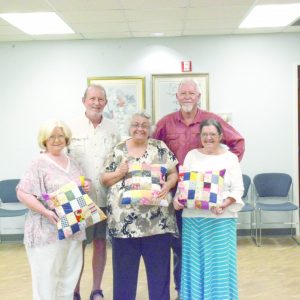 Quilters of the Greenville-Butler County Public Library Quilting Club are pictured with Bruce and Richard Branum. From left are quilting club members Cathy Hickman, Gail McKenney and Dee Baker. They presented Bruce and Richard with quilted pillow cases after the brothers donated quilting materials to the club their grandmother and mother collected over many years. (Photo by Kristy Houston)

The Greenville-Butler Public Library Quilting and Crochet clubs are looking do their part for those in the Butler County area needing a bit of comforting.

Pat Tucker, head of the crochet group, said the group had gotten the idea for Prayer Shawls from a fellow member, and the charity outreach was born form an incident she witnessed at a local Dollar General.

“The prayer shawls really touch my heart because it really touches me,” Tucker said. “My family and I were in the Dollar General store in town, and I could hear a lady screaming in the back were the employees usually are, and I went back to see what was going on with her and her daughter had been in an accident. I decided to do something special for her because her daughter had passed away. A lady had come to the crochet club one time and did a prayer shawl ministry, and I wanted to give one to the woman in Dollar General especially, but when I got back to the store she had quit, but this is all in honor of her and her daughter.”

Last year, the women of the group prayed over the shawls themselves, but this year they enlisted the help of Rick Smith, pastor of Buckaloo Church. Tucker said they were seeking a list of those in need in the community to ensure the shawls were put to good use.

“We are asking all people if you know,” Tucker said. “We had about 28 shawls which have been given away, so we really only have about nine or 10, but we’re going to have more. Anyone who has a problem, that’s going through depression, diabetes, HIV, any kind of ailment, we’ll be happy, more than happy, to supply them with a shawl. As long as there is a need for them, we will keep making them. All we ask is for a list of those in need and we will get shawls to them.”

While the crochet group will be giving out the prayer shawls, the quilting club will be making fidget quilts for those suffering from Alzheimer’s or Dementia. Gail McKenney, head of the quilting group, said the idea was born from those made in St. Charles Public Library in Illinois. The quilts act as an outlet for those with nervous energy, giving them a wide variety of odds and ends to play with when anxious or suffering from different aspects of debilitating diseases. Some featured pieces on the quilts include denim pockets with fake fur, buttons and zippers to promote continued dexterity for patients.

“This is part of our charity we do every year,” McKinney said. “One year we gave out bears that we made. One year, we did dolls for Safe Harbor, this is just something we do every year for charity, and we just give them out. Kevin Pearcey, GBCPL director, gave us a flyer one day, and we sat down and we thought it would be fun and interesting. We don’t know anyone specifically who needs the fidget quilts, but we figured people at the nursing home might be able to use a few and the schools in the area.”

The clubs are currently a group of 10 women, but those wanting to help the group make more prayer shawls and fidget quilts or learn more about each skill can come out to the GBCPL Tuesdays for crocheting from 3-5 p.m. and Thursdays for quilting from 1-3 p.m.