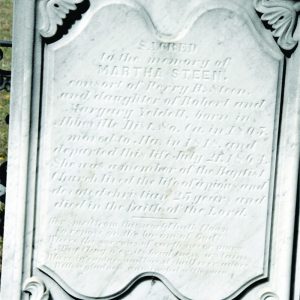 The third earliest Mt Moriah pioneer of record, James Steen, was born in Delaware about 1768 and about 1792 married Sarah. H. Steward.  According to the birth date and place of a child, Perry R. Steen, they lived in Green County, Georgia by 1800.

James Steen served first as Private and then as Corporal in the 1st Regiment (Harris’s) of the Georgia Militia during the War of 1812. According to family tradition, James and Sarah had moved by 1814 to the eastern part of the Mississippi Territory which by 1817 had become the Alabama Territory, and at the time of the US 1818 Census, he is shown as resident of Monroe County, Alabama Territory.

In August of 1819, according to the General Land Office at Cahaba he purchased approximately 320 acres from Robert Yeldell of Butler County, which ten years later had been paid off and he was awarded Certificate No. 3688 for this land. He made several other purchases of land and held several Certificates for them.

By the time of his death in 1838 they were living in Lowndes County. He and his wife Sarah, who died in 1834, are both buried at Mt. Moriah. They had at least seven children, all but the first were probably born in the Mississippi or Alabama Territory; some of them are buried at Mt. Moriah in its cemetery.  These children married spouses surnamed Yeldell, Earnest, Crum, and Lee.

Perry Robert Steen, the fourth earliest pioneer, came to the area with his father which family tradition holds was about 1814. He was born in Green County, Georgia in 1800.  He married, about 1822, Martha “Patsy” Yeldell, daughter of Robert Anthony and Margery Gibson Yeldell, born 1805 in the Abbeville District of South Carolina, and who had come to the Alabama Territory with her parents and siblings in 1818. She had been so awed by the fact she came to the Alabama Territory that she had this momentous fact carved on her tombstone.

“Sacred to the memory of Martha Steen, consort of Perry R. Steen, and daughter of Robert and Margery Yeldell, born in Abbeville Dist., So. Ca. in 1805 moved to Ala. in 1818 and departed this life July 21, 1864. She was a member of the Baptist Church, lived the life of a pious and devoted christian 25 years and died in the faith of the Lord.

Her spirit from this world hath flown

To repose on the bosom of God!

Where the sorrows of earth never more

May flight o’er its brightness a stains

Where, in rapture and love, it shall ever adore

With a gladness unmingled with pain.”

Perry R. Steen, in 1831, purchased “158 and 92 and a half” acres in Wilcox County from the General Land office at Cahaba. By 1850 he owned an additional 300 acres in Butler County. However, the US Census records show him consistently in Wilcox County.

They were active members of the Mt. Moriah Church. The home he and Margery lived was about two miles beyond Mt. Moriah Church, on Steen Lane where one could traverse from Mt. Moriah to Furman and on into Dallas County. It had been a part of the Old Federal Road which meandered in both Butler and Wilcox Counties.

Their home was on the edge of the Ridge that overlooked the prairie below. It was a large two-story “Dog Trot” and had a large staircase that went upstairs. In the parlor was a large fireplace that would burn logs three feet long and which had a beautifully carved wooden mantle between six and eight feet long, heavily carved with pineapples. Their vegetable garden near the home was in front of the house since the back dropped off to the prairies.

It was described as having been laid off in squares with the vegetables in the center and with flowers bordering the outside of the squares. Nearby, on the flat prairie land is an old Indian mound where at one time in the distant past could be found a number of projectile points, a tomahawk, sharks’ teeth, bones and other artifacts that had been disturbed by the plowing and planting.