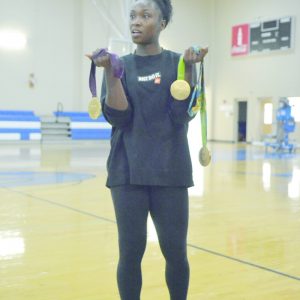 Having dedicated herself to her athletics, Bartoletta garnered herself a full-ride four-year scholarship to the University of Tennessee based on her merits, but shared with students the adversity and doubt she had faced as she went for her dreams.

“Everybody in the world was surprised, but me, and that’s how it’s going to be for you for the rest of your life, probably,” Bartoletta said. “You’re going to have goals. You’re going to have dreams that only person that thinks possible is you; you’re the only person. You don’t need everybody on your Snapchat disagreeing with your plans for your life. They don’t have to, you just have to.”

While at the University of Tennessee, she became an NCAA Champion, All-American and SEC Academic All-American. During the 2012 London Olympics, she won gold and set a world record with teammates in the 4×100. She was named to the U.S. National Bobsled Team in 2012 and finished third in her first World Cup Event. In 2016, she again claimed a gold medal in the long jump at the Rio Olympics as well as the 4×100 meter relay.

Bartoletta gave students insight into the difficulties an Olympic athlete may face, focusing on her time at the 2016 Olympics. Bartoletta said she still gets nervous before races, but encouraged the students in the audience who felt similar jitters to use the nerves to drive them and pus them to reach their dreams.

“Nerves aren’t bad though,” Bartoletta said. “You just push through that, push through the fear. Every time I get on the line to sprint. I am scared to death. I don’t know what it is about running a hundred meters, but it’s scary for me. But every time I take a deep breath, remember all the work that I’ve done and do it anyway. Nerves aren’t bad. It’s good energy for you to use it.”

Butler County Superintendent John Strycker echoed Bartoletta’s sentiments during the program, advising students to seize the opportunities ahead of them.

Despite her many Olympic accolades and maintaining her career as a professional runner, Bartoletta has focused much of her energy on volunteering and serving as a positive role model for young people throughout the country.