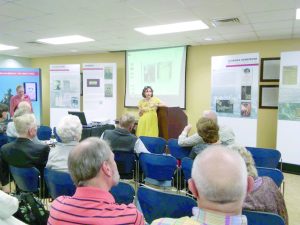 Dr. Ruth Truss answered questions after her program about the 167th Alabama Infantry Regiment during Sunday’s presentation for the BCHGS. (Mollie S. Waters | The Standard)

Dr. Ruth Truss, a history professor at the University of Montevallo, was the guest speaker at the quarterly meeting of the Butler County Historical & Genealogical Society on Sunday at the Greenville-Butler County Public Library.

Truss told the audience about the involvement of Alabama’s 167th Infantry Regiment in World War I (WWI).

“My area is really the Alabama National Guard,” said Truss, who told the group how her dissertation research was on the history of the Guard.

According to Truss, when the Alabama National Guard was first formed in the early 1900s, there were three infantry regiments. The first regiment was located in Mobile, the second in Montgomery, and the third in northern part of the state.

The third was disbanded, and afterwards, a fourth regiment was created and was based in Birmingham.

It was primarily from the fourth regiment that the 167th Alabama Infantry Regiment would be created, but it encompassed soldiers from all over Alabama.

“For many of these men,” Truss said of the young Alabamians sent to Texas, “it was the first time they’d been out of the state.”

After leaving Mexico, the Guard was kept in service because the United States had entered WWI on April 6, 1917.

At first, the soldiers were stationed at Camp Sheridan in Montgomery, but later, they were sent to New York where they were joined by regiments from New York, Iowa, and Ohio to become the 42nd Division, which is often called “The Rainbow Division.”

Truss told the audience about the difficulties the soldiers faced in WWI. Some of those issues included the horrors of trench warfare.

“I spend a lot of time on trench warfare in my classes,” said Truss, “because I think it is important to remember what we asked our young men to do, to give up.”

The soldiers faced horrible weather conditions. The trenches would fill with water faster than the soldiers could bail it out. Because of this, their clothes and blankets were never dry, and their shoes would freeze. They had to sleep in mud, and their food was always cold.

The Alabamians who were in the 167th Infantry Regiment of the 42nd Division fought in some of the worst battles of the war, including the Battle of La Croix Farm in France.

During that battle, the 167th suffered severe casualties.

In fact, during the totality of the Aisne-Marne Offensive, of which La Croix Farm was a part, the 167th suffered 55% casualties, which included killed, wounded, and missing.

Truss added that over the years of working on her dissertation more than 30 years ago, she was able to interview many surviving WWI soldiers, including Greenville’s own Joe Haygood.

“The men with the worse combat experiences are the ones I found to be the most humble about it,” said Truss.

Sunday’s meeting was the last for the BCHGS for the year. The next meeting will be in January.