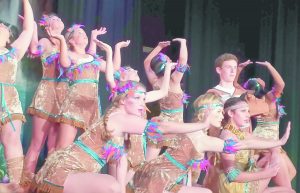 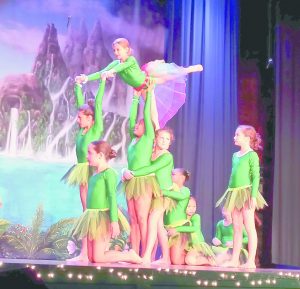 Friday and Saturday nights saw the Ritz Theatre bustling with energy as audiences packed the auditorium to watch the students of Sonya’s Dance & Fitness perform in “Finding Neverland,” which is based on the story of Peter Pan.

Dance instructor Sonya Rice welcomed the audience to the performance before it began, and she prepared them for something of a surprise.

“For the first time in 21 years, the opening number will not be done by our advanced jazz class,” said Rice. Instead the number was performed by the students in the beginner and intermediate jazz classes, whom Rice said really stepped up for the number.

The opening number featured dancers ages 7-14 who performed “In the Beginning……..All Children, Except One, Grow Up.”

Starring as Peter Pan was Amber Smith with Sydni Bowers as Tinkerbell. The Darling Family members were played by Lance Smith as Father Darling, Sarah Nichols as Mother Darling, Kimball Nall as Wendy, Hannah Sells as John, Hayden Fail as Michael, and Xada Ingram as Nana.

Guest starring in the first act were Olivia Glenn and Courtney Rice.

The pointe classes and dance team also performed in the second act.

At the end of the show, Rice thanked the audience members for their attendance and their applause.

“Your applause is their reward,” said Rice. “I’m so proud of all your children. They were so wonderful tonight! I thoroughly enjoyed this. I truly have.”