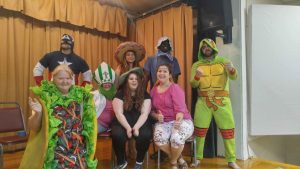 “Penny for Your Thoughts” will be performed this Saturday night. Seated (L-R) Johnna Pitts as Janet Killian, Harriett Foshee as Gertrude, Cierra Oswald as Jessica, and Mollie Waters as Myrtle. Standing (L-R) Leith Greene as Rick Winters, Jessica Bell as Buffy, Joseph Longmire as Adam, and T.J. Garrard as Matt Lane. Not pictured are Hannah Styron, who will be playing Penny Ramsey, and Michelle Styron, who will be playing Darla Winters. (Picture by Michelle Styron)

The Greenville Community Theatre (GCT) will perform “Penny for Your Thoughts: A Comedy in Two Acts” by Scott Haan on Saturday at 7 p.m. at Greenville’s First United Methodist Church in the fellowship hall. The play is about a girl named Penny Ramsey, played by Hannah Styron. Penny is having some boyfriend trouble, and unfortunately, her brain people are not always helpful in getting things back on track. In addition to Styron, other cast members include T.J Garrard as Penny’s boyfriend Matt Lane, Johnna Pitts as Penny’s mother Janet Killian, Leith Greene as Mrs. Killian’s employee Rick Winters, and Michelle Styron as Rick’s sister Darla. Penny’s brain people are characters who reside in Penny’s mind and help her with all her decisions. They include the fashion conscious Buffy, played by Jessica Bell; the moody Jessica, played by Cierra Oswald; the nerdy Myrtle, played by Mollie Waters; the old-fashioned Gertrude, played by Harriett Foshee; and the athletic Adam, played by Joseph Longmire. Directors are Pamela Hubacek and Lori Neilson. Dent Neilson is stage manager, and Greig Foshee will be working lights and sound. Johnna Pitts, President of GCT and a cast member for the show, said she was excited about the prospect of bringing this show to the stage. “As we approach the final week of practice for ‘Penny for Your Thoughts,’ I have been amazed at the talent we have assembled for this production,” said Pitts. “The new actors have acclimated perfectly to the stage, led by an experienced core troupe from GCT, and the dinner theater promises to be another great one for the books.” Catering for “Penny for Your Thoughts” will be by BBQ 65 and will include smoked chicken, two sides, jalapeno bread, dessert, and tea or water. Tickets, which are $25 each, can be purchased at The Medicine Shoppe, The PineApple,  and McFerrin’s Jewelry. Pitts recommends those interested in attending get their tickets early because only 80 are being sold, and over half have already been purchased. “We encourage everyone to get their tickets quickly because they are going fast,” said Pitts. “Each year we have done the dinner theater, we have sold out, and we don’t expect this year to be any different. “A delicious dinner plus a quality entertainment piece that is guaranteed to be memorable is a rare event for Greenville and something not to be missed. Join us July 15 at 7 p.m. for a hilarious evening of food and fun.” For more information, call Johnna Pitts at 714-9129 and “like” the Greenville Community Theatre Facebook page.