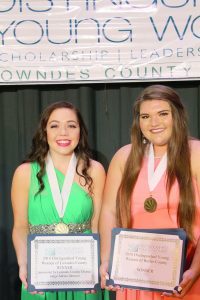 Schofield, a senior at Fort Dale Academy, won $1,750 in cash scholarships and a stipend to be used for competition at state by being named the winner. She also won $750 in preliminary awards, winning talent, interview and the spirit award. Schofield performed a vocal performance of “The Wayfaring Stranger.”

Amber Smith, also a senior at Fort Dale Academy, was named first runner-up. She also won the scholastics and self-expression preliminaries. She received $1,850 in cash scholarships.

Greenville School senior, Alyssa Lear, was named second runner-up. She also won the Be Your Best Self essay and was awarded a total of $900 in cash scholarships.

Carlton, a senior at Fort Dale Academy won the talent, scholastics, fitness preliminaries and the Be Your Best Self essay and spirit award. She performed Tocatta on piano. Carlton earned $1,600 in cash tuition scholarships. Carlton’s sister, Mary Claire, was the Distinguished Young Woman of Lowndes County in 2016 and her mother, Dana McGough Carlton was Lowndes County’s Junior Miss in 1982.

Hannah Rogers, who is also a senior at Lowndes Academy, was named first runner up. She also won interview and self-expression preliminaries. Rogers walked away with $750 in cash scholarships.

Both Schofield and Carlton will represent their counties in the state program in January.