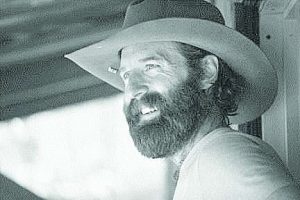 Sean Dietrich loves to write. In 2014, he decided to share his thoughts through “Sean of the South,” an online blog, writing each day of ordinary people and his favorite things about southern living. Not only is the blog’s popularity growing, so are his appearances in small towns across the South, including upcoming appearances in Andalusia and Greenville.

“I told myself when I started this thing I wasn’t going to write about anyone famous,” he said. “I was going to focus on exceptional people … who were underneath the radar.”

His path in life was not easy. Identifying with the underdogs in life, he draws inspiration from experiences during childhood that led to his family’s move from Missouri to Walton County in the Florida Panhandle. Experiences such as losing his father at the age of 12, working to help out with family expenses, and learning valuable life lessons in his teen years hanging drywall and rising at 2 a.m. to help his mother deliver newspapers.

“It’s people who work hard; it’s kids who don’t get the attention they need – if they’re sick or they feel overweight. I really have a spot for the overlooked.”

In a July 19, 2017, blog, he responded to a negative opinion of his writing in a way that makes the reader realize the obstacles he overcame to get to this point. In his simple, straightforward style, he describes a ceremony in a gymnasium where he is handed a piece of paper that took him nearly a decade to achieve.

“Getting into a community college was no small feat for someone like me. The truth is, I barely made it. I took classes when I could afford them. I attended night school after work. I ate suppers in my truck, going over homework under a dome-light. I wish I could tell you I was a fantastic student. I wasn’t. It took me nearly a decade to finish.”

He continues to explain it was the influence of those who believed in him that pulled him through those long years toward his goal (read the entire response at http://seandietrich.com/dear-sean-11/), and he felt humbled by what he achieved.

Now the author of seven books, Dietrich enjoys an expanding fan base on social media and posts daily on Facebook to a following of more than 30,000. Such topics as fried chicken, biscuits, coonhounds, roadside cafes, trees, birds, spittoons, skinks, and fishing, are capturing the minds of those who read his works. His writings have been published in South Magazine, the Bitter Southerner, Thom Magazine, and the Tallahassee Democrat.

“That town really opened their arms to me and embraced me as their adopted son,” he said. “They have been so good to me.”

He is also enjoying some speaking engagements, preferring the small town settings where he can meet the “salt of the earth real people” he loves so much.

Nanny’s Fine Dining is offering everyone a chance to enjoy a September Sunday evening of storytelling and song shared by Dietrich on the restaurant’s front porch. Attendees are invited to bring their lawn chairs, blankets and refreshments and enjoy a picnic on the restaurant’s front lawn while Dietrich performs a 90-minute set of songs and stories. Admission is $10 and there are no advance tickets. Everyone can “pay at the porch.”

Dietrich will be on campus at LBW Community College in Andalusia at 11 a.m. on Monday, Sept. 11, 2017, in the Solon and Martha Dixon Theater for the Performing Arts, and on the Greenville Campus on Sept. 12, at 11 a.m., in the Wendell Mitchell Conference Center. These events are free and open to the public, with books available for purchase for $10-$13 each.

While in Andalusia on Sept. 11, Dietrich will also be the featured speaker at an event for Bethesda House to raise funds to re-open a domestic violence shelter in Covington County. His band “The Boiled Peanut Vendors” will also entertain. The event is 6:30 p.m. on the grounds of Springdale Estate. For ticket information to this event, contact Cindy Howard at 334-208-0801. Tickets are available at CCB Community Bank and at SIB Bank in Opp and Andalusia.

He will also be speaking at the LBWCC Greenville Campus at 11 a.m. There is no cost to attend and is open to the public.