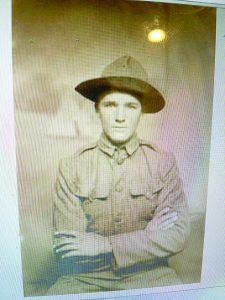 The Alabama National Guard recently commemorated the 100 year anniversary of the 167th Infantry Regiment’s deployment to WWI on August 28 by dedicating a bronze sculpture at Union Station in Montgomery.

3,677 Alabama soldiers departed that day by train from Union Station. 616 would not return and more than 1000 were wounded.

The sculpture was commissioned by Nimrod Frazer as gift to the City of Montgomery. Frazer is a Korean war veteran and Montgomery civic leader. Frazer is the author of “Send the Alabamians: World War I Fighters in the Rainbow Division.

The sculpture is a second casting of a memorial that stands in honor of the 42nd Rainbow Division, of which the 167th was part, on the site of the Battle of Croix Rouge Farm in France.

The event was attended by descendants of the 167th and hundreds of others.

BODY OF BUTLER SOLDIER TO ARRIVE THIS WEEK

Mr. Asa Hendricks has received notice from the Government that the body of his son, Private Rufus Preston Hendricks will arrive at Brooklyn on Monday and would be sent to him.

Private Hendricks was the first Butler County boy to meet his death in the battle of the war. On the 15th of July 1918, a large number of German airplanes shot up the American trenches with machine guns and among those companies suffering casualties was that one of the 167th of the old Fourth Alabama, to which Hendricks belonged.

Funeral arrangements have not as yet been completed, pending the arrival of the body. The local troop will have n the funeral and fire the last salute over the grave.

He bravely laid down his life for the cause of his country. His name will ever remain fresh in the hearts of his friends and comrades. The record of his honorable service will be preserved in the archives of the American Expeditionary Forces. Signed

The above has been received by Mr. and Mrs. Asa Hendricks, the parents of Private Rufus Hendrix. This splendid young man was one of the boys who gave his all on the altar of his country’s need, and personal communication from his commander-in-chief is held very dear to them.

A plaque on the monument quotes from General Douglas McArthur’s writings, “Two battalions of the 167th Infantry assisted by the 168th Infantry on the left, with the greatest courage and most severe losses, seized Croix Rough Farm on the point of the bayonet. The unexpectedness and violence, and the difficulty of this vital operation cannot be overestimated; the gallantry and courage of the assaulting troops has never been excelled in the Rainbow’s history.”