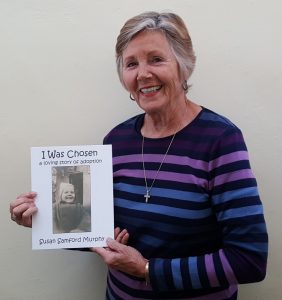 When she was three and a half years old, she was adopted by two people who made her feel loved and cherished.

She chronicles her story of adoption in her first book, “I Was Chosen: A Loving Story of Adoption.”

The book is divided into two parts.

The first part is written as a children’s story that tells about Murphy’s being given up for adoption, then growing up in six different foster homes before being adopted.

The second part of the book is written for adults to provide additional background information about her birth parents, adoptive parents, and what she learned from the influential people in her life.

Murphy said she wrote the book because every adoption story is different, but special.

“My adoption was an adorable, cute story,” said Murphy. “I thought that it might help people who want to adopt. Every kid has a story.”

Murphy, who has always known she is adopted, has promoted adoption and been an advocate of foster care all of her adult life.

She hopes the book will encourage adoption and serve as a way for others to understand how important it is.

Murphy will hold a book signing at the Camellia City Bakery in downtown Greenville on Tuesday, Nov. 28 from 4 – 6 p.m. Copies of her book will be available for purchase at that time.