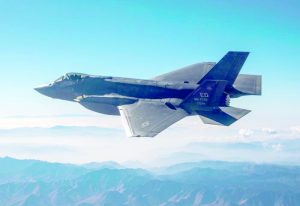 Roby, who has helped lead the effort to land the coveted mission, congratulated the 187th Fighter Wing and the Montgomery community on this significant achievement.

“Today is a historic day for Alabama and the River Region.  I could not be prouder of the men and women of the 187th for how they demonstrated their capability to carry out this special mission.

“I want to thank Brigadier General Randy Efferson, Mayor Todd Strange, Governor Kay Ivey, my colleagues in the Alabama congressional delegation, and the F-35 Task Force for their incredible teamwork in showing the Air Force all our area has to offer. There’s no question that our community’s firm support for our military installations and units made a big impression on decision makers.

“As the legacy unit for the Tuskegee Airmen ‘Red Tails,’ the 187th Fighter Wing has an incredibly proud history. With today’s announcement, we know this unique unit has a very bright future with the F-35.”

As the Pentagon begins to replace many Cold War-era fighter jets with the F-35, the Air Force is selecting two Air National Guard units to host an F-35 mission in addition to active duty bases.

Last year, the Montgomery-based 187th Fighter Wing was one of five Air National Guard units placed on a short list of potential locations. A partnership of unit commanders, community and state leaders, local business leaders, and Alabama’s congressional delegation has worked together to build the case for Montgomery and the F-35.

Throughout the multiyear selection process, Roby has worked with the 187th Fighter Wing command to help demonstrate the unit’s capability to top Air Force and congressional officials. Most recently, Roby hosted Defense Appropriations Chairwoman Kay Granger in Montgomery to show off the 187th Fighter Wing as a potential F-35 location.

In late September, Roby made a “final push” to Air Force officials, emphasizing several key strengths that set Montgomery apart as the ideal location for this coveted mission.