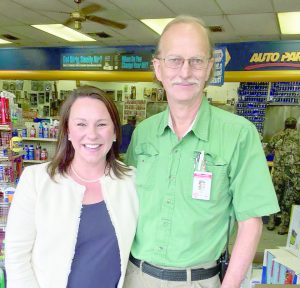 On a recent whirlwind tour through Greenville, U.S. Rep. Martha Roby (R-AL) visited Fort Dale Academy (FDA), the Greenville Rotary Club and also Butler County Association of Volunteer Fire Departments President Keith Foster. At FDA, Roby spoke to the senior class about her service as a U.S. House of Representative and the details of her busy life. She said that her typical week in Washington is filled in the morning with committee meetings and office meetings throughout the entire day. In addition she meets with constituents that make the trip to Washington, DC to speak with her. Although her schedule is very busy she still makes time to cook and spend time with her family. She went on to mention that she serves on the appropriations and judiciary committee. She stated it was great opportunity for her and the State of Alabama and felt that it was a real privilege. After speaking of her college career and her degree in music from New York University, she added she attended and graduated from the Cumberland School of Law at Samford University. Thereafter, she entered politics on a local level and then decided to run for Congress. She expressed to the students that they were about to face their first big crossroad in life. You need to have goals she added. She continued, “Keep your eyes wide open so you won’t miss an opportunity to do what you want to do.” Roby’s visit with Keith Foster consisted of the concerns from volunteer fire departments (VFDs) about the problems they face in funding and what the needs for the departments are. According to Foster, many departments face replacing gear that is old and being able to replace gear may be two or three cycles out. Cycles are considered to be 10-year increments. Foster added that he spoke to Roby about changing the grant process for VFDs so those departments without local tax funding should be put ahead of those departments who receive tax funding. At the Greenville Rotary Club, Roby spoke to the audience about the positive things occurring in Washington. One example is the recent Tax Cuts and Jobs Act. The average American family could see $2,100 a year in tax relief.