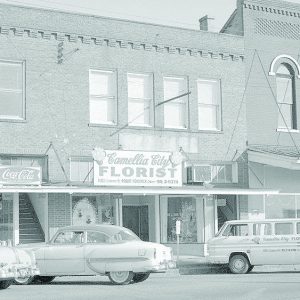 Although each of the dealerships had a parts department and a parts manager they still needed to call the parts stores for parts not kept for other car brands.  In Greenville there were a number of independent auto repair shops and service stations that needed auto parts.

There also was a pretty good bit of walk-in trade from other businesses like logging and farming as well as the occasional auto owner.

Fox Chevrolet Company may have been our largest dealership customer. Mr. Harold Johnson was the parts manager. When he called for a part to be delivered he meant for it to be delivered NOW. He always had the sternest look on his face but asking about his son Butch would almost always bring out a smile.

I suspect sometimes his attitude was because of my being a “summer boy” and he was just having fun making me squirm. I always enjoyed going to Fox because of the new Chevys on the floor.

One day I stopped to talk to “Foxy” Fox. I made some comment about how nice it was for them to wash and vacuum a car after repairing it.

Foxy said, “Yes it is but do you know what’s going to happen to Wilson’s job if the minimum wage gets raised?  We’re going to have to eliminate his job. He’s our lowest earning employee but if we have to pay everybody else more he will have to go. He’s married and has three young children”. Sad case but an economics lesson!

Norman Motor Company was probably our second largest customer. Their parts manager, a name I have forgotten, was a really nice guy but was all business. Again, I got to see the new Buicks and GMC’s on the floor.

One of those summers, Mr. Casey, a gentleman from Lowndes County who was in the logging and timber management business, ordered two new Buick Skylarks and a huge GMC logging truck. The Skylarks were for his sons who went to Auburn.

I was amazed that one of them had a 4-speed manual transmission in the floor in a day when so many pretty cars were going automatic. I never knew when Mr. Casey was supposed to pick those vehicles up but they stayed parked in front of Norman Motor Company for a couple of weeks. It was a good marketing idea by Mr. Joe Norman.

Clement Motor Company, the Ford dealership, was just down the street a couple of blocks. At first Bill Lewis was the parts manager but later he became service manager and Larry Crews became the parts manager.

Larry was in senior high when I was in junior high but in Greenville then we knew everybody up 3-4 grades and down 3-4 grades and he and Douglas had coached in the Babe Ruth League.

The Master Mechanic at Clement Motor Company, probably in all of Greenville, was Buster Brown. When I delivered a part going to Buster I would take it to him and ask him to show me what he was going to do. He was always happy to do so.  If a car was fixed by Buster it was fixed! 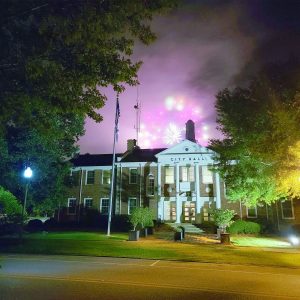